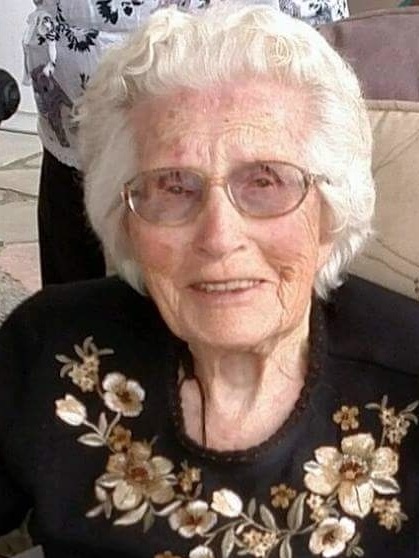 Born June 23, 1911 in Wuretflet, Germany, Omi came to the United States at the age of eighteen, arriving in Long Island, NY. She lived in New York for many years before moving to Upper Black Eddy in 1997. As a young woman, Omi was a domestic helper for a doctor's family in Long Island. After getting married, she owned a deli, with her husband, in Richmond Hill, NY. Omi was also a homemaker. Later in life, she worked as a salesperson at Gertz Department Store and Frankles Department Store, both in Long Island. Omi loved cooking and baking. She was an avid knitter and knitted up until two weeks ago, donating baby blankets to the needy. Omi was known for cross stitching bible verses, giving them to loved ones over the years. She was a member of the Trinity Lutheran Church in Glen Cove, NY.

Daughter of the late Heinrich & Gesine (Behrje) Korber, Omi is survived by her two loving daughters Helen B. Post of Macungie, PA and Margaret A. Pfisterer and her husband Paul of Upper Black Eddy, PA, her brother Herbert Korber of Germany, her five grandchildren, thirteen great-grandchildren, and six great-great-grandchildren. She was predeceased by her beloved husband Eilert Frerichs in 1969, her son-in-law Lewis Post, her three sisters Anna, Johanna, and Alwina, and her three brothers Hinrich, Johann, and Heinz, all who passed away in World War II.

A Celebration of Omi's Life will be held on Saturday, October 26, 2019 at 11 AM at the Frenchtown Presbyterian Church, 22 Fourth Street, Frenchtown, NJ. Arrangements are under the care of the Johnson-Walton Funeral Home, 24 Church Road, Milford, NJ.

From: Barbara Davis McGavock
So very sorry to learn of your loss. My thoughts and prayers are with you.