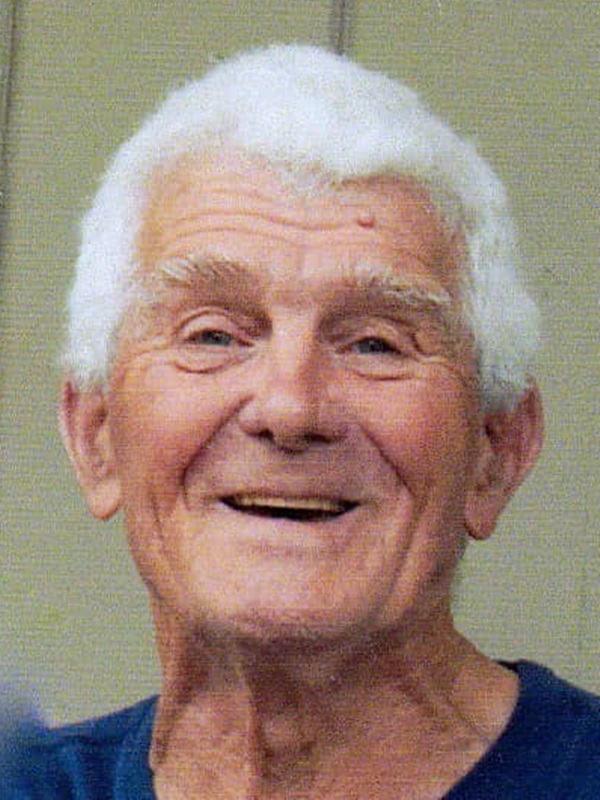 Curtis S. Vosburg, Sr., 91, of Belvidere, NJ, formerly of Frenchtown, NJ, passed away on Tuesday, November 19, 2019 at The Chelsea at Brookfield in Belvidere, NJ.


Born January 4, 1928 in Pittston, PA, Curtis lived in Neshanic, NJ before moving to Frenchtown, NJ in 1975. He served as a drill sergeant in the US Army Air Corp and was a veteran of World War II. Curtis worked for Mohawk Triboro Devices in Doylestown, PA, for many years. Prior to that, he worked as an auto mechanic for Kelsey Ford in Lambertville, NJ. He was a member of the Frenchtown American Legion Post 113 and a former member of the Frenchtown Presbyterian Church.


His parents, John and Mary, were very hardworking people and always made time for his family even when they were busy. In his early childhood days, Curtis remembered playing stickball, baseball, and board games with his sisters. He liked to go ice skating and fishing. Curtis went to Exeter Township School in Moosic, PA. His teenage years were mostly spent helping his parents around the farm. At age 18, he signed up for service in the US Army Air Corp. He worked as a mechanic on planes and vehicles. He sent his paychecks home to help his parents.


Curtis was introduced to Kathryn by her sister, who he attended school with. When all was said and done, 3 Vann sisters married 3 Vosburg brothers! The rest was history. Curtis and Kathryn married on March 31st, 1950.

Fishing was Curtis’s favorite hobby. He loved going with his buddy Bruce. He loved being outdoors camping and boating, woodworking and gardening. He enjoyed handy work such as tinkering, building, and fixing things. His children even named him MacGyver! Curtis loved visiting with his family and friends, especially while sitting around the campfire singing and playing guitars. Curtis taught himself to play the harmonica while he was in the service.

Curtis was most proud of his children and how they raised their children to take care of and to be supportive of one another as well as all of their accomplishments. He always said “the world needs more integrity and everyone just needs to be honest with one another”.


A Celebration of Curtis' Life will be held on Saturday, November 30, 2019 at 11:30AM at the Milford Vol. Fire Company, 21 Water Street, Milford, NJ. Please feel free to add a covered dish or dessert to our catered table.

Private graveside services will take place at the Frenchtown Cemetery. Arrangements are under the care of the Johnson-Walton Funeral Home, 24 Church Road, Milford, NJ.

In lieu of flowers, memorial contributions may be made to the Alzheimer's Association at act.alz.org/donate or to The Chelsea at Brookfield, 1 Brookfield Court, Belvidere, NJ 07823. Please add note in check memo “Activity Fund”.

From: Kenny Stull
Laurie,Brenda,and Cindy , so sorry to hear of Dads passing . Only ever met him once but with the name Vosburg he had to be a great person . Luv you all , Kenny .

From: Bill Pfeiffer & Sharon Vosburg Pfeiffer
Uncle Curt will always stay in my heart as a kind, respectful and patriotic human being. His silly sense of humor and harmonica could always bring a smile to your face. My brothers & sisters always got a hug... even when we played practical jokes on him (remember the whipped cream in his coffee and the giant fake fish in his tackle box?). Needed a push & a jump start on your car?... he was there. He was one of a kind in this big world. He was the last of his family/ generation... The Greatest Generation. Love you all and wish we could have made it to the service. Sherry and Bill

From: Giselle Yeagher
Heartfelt sorrow for your family on the passing of your Papa. He was an awesome sweet man. He was loved by all who knew him and will be missed terribly. Another beautiful flower blooming in God's Heavenly garden. Love hugs and prayers for the family from the Kohm and Yeagher family.

From: Audrey Byrnes
We are very sorry to hear about the passing of your father. He truly lived a full life with so many accomplishments. Best wishes to the Vosburg family during this difficult time. Love, Audrey and Kevin Byrnes

From: Jon H. Vosburg lll
In Memory of a Blue Collar Worker Curtis Vosburg: Four things about Uncle Curt come to mind, by his nephew “Skip”… First, was his inspiration to me, even as a young boy. Because of the time he would give me growing up, I wanted to join the Air Force as he did during WWII. Model Airplanes, Air Force & Motors Not sure how we came upon any additional toys, as our immediate family was extremely poor. However, it might have been a neighbor that gave me a 18” long balsam wood Airplane kit designed for a small motor. Uncle Curt wood come over to our house along the creek in New Jersey and, in the garage/shed across the street, we would work together to build this structure. He patiently would explain to me how the aileron, elevator flaps, fuselage, rudder and all of the aerodynamics that would help this play fly. Further, he would explain how the fuel, pistons and propeller pitch would drive the plan forward. The plane was never completed, as I never had money for the little gas motor to help it fly. As for joining the Air Force, as pilot, never came to fruition because of my near-sighted deficit. However, my appreciation for speed, hot rods and motorcycles grew over time. Stock Cars, Hot Rods & Family Although our families were poor, Curt/Kathy & kids and John/Glady & kids would become a wonderful bond and experience during my formulative years. Uncle Curt instilled in my great appreciation for the Ford Motor Company. As a Mechanic Extraordinaire, Curt kept all the cars in our family humming like a bee. Although I would come to own many Motown brand named vehicles to date, my loyalty would still be with what my Uncle said was the best Detroit decision one could make. Stock Cars: Oh, who would ever forget the hey day of the Stock Car racing at the Flemington Fair Grounds! I believe it was Uncle Curt, because of his Mechanical expertise, outgoing and friendly personality and his motor-head connections, allowed our family to park in the privileged “in field” while these dangerous and extremely loud (straight exhaust pipes) drivers would race around the track. Here, on this weekend night, the adults could drink beer and laugh while being entertained by such dangerous daredevils. We all would go home with a coat of grit and oily skin form the wonderful dirt track. Vosburg Classic Cars & Restorations Between Uncle Curt and Brother Roy, I became deeply enamored with custom hot rods, motorcycles and racing. This has recently inspired me to open a part time hot rod business called Vosburg Classic Cars & Restorations, LLC. I have learned welding, metal fabrication and painting largely because of the influence of Uncle Curt to pursue this interest. Several years ago now, I bought a 1951 Ford F1 Pickup Truck for several reasons: 1st, it reminded me of the trucks Uncle Howard Piatt had on his farm when we would go up to “The Farm” and help our cousins bail hay for our only summer vacation. Second, it is the year of my birth and finally as an homage to my Uncle who put “Ford Proud” into my veins. Unfortunately, although ½ completed to date, Uncle Curt has never got to see this hot rod he inspired. Jokes and Stories with Uncle Curt One of the favorite times I will cherish, is when Brother Dave I would get Uncle Curt Flustered by playing jokes him. Curt, always in good humor, would shake his head and want to denounce any family relationship to Dave or I. WWII: Even with his deteriorating age and maladies, WWII remained vivid in his memory. I would always love to hear all the capers and military maneuvers he experienced in the Pacific.’ A Hard-Working Blue-Collar Man We, Piatt’s and Vosburg’s, have been blessed by the family structure and strong leadership from our mothers and fathers. What Tom Brokaw referred to as the “Greatest Generation” was true about our fathers in particular. All have fought gallantly and patriotically during WWII. They brought home scars from the wars they fought and held some of the atrocious memories from us. They never complained what military duties was asked of them. Uncle Curt, like my father and other uncles, displayed and instilled the virtues of hard work and taking care of their families. We all were poor, but we did not go hungry. All of us have learned the ethics our parents have taught us which remains in us today. One observation, during my pre-teen years, has formed the philosophy I still carry to this day. During the summer usually on a Saturday, the Curt/Kathy -John/Gladys clan would join up with the Family of Bill & Dottie, who had an inground pool. I believe Bill and Uncle Curt worked together? While us kids (BTW, that’s perfect Pennsylvania English) would endlessly splash about the pool, our parents collectively would open a gallon of Vodka, coupled with orange juice, would sing and howl at the moon until the bottle was finished and it was time to take the kids home and put them to bed. Sometime Curt, Bill and Dad would take on too much lubrication. But the point here is this…These guys and gals had very little vices and pleasures amid there blue-collar laborious duties in providing for us kids. They deserved what little pleasure they could share with one another after a hard, weeks-worth of working. God Bless you Uncle. It’s time to put that last tool away…your work is done. Nephew “Skip”

From: Ted Alt and Family
Our condolences , to the entire Vosburg and extended family. I thought I would relay my thoughts of Curt with my being a car guy. When I first met Curt he was so bright and smiley, much like a new sports car that everyone noticed whenever he came into the room or yard. He always had wonderful things to say. As time passed he went from being the new sports car, to more like the classic collectable, which of course needed to be kept in the garage a little more than years gone by. With his passing he will always be remembered as the the great classic that could bring a smile and laughter to any venue he attended, his everlasting memory will live on.

From: Gary Vosburg sr
Steve, Cindy,Brenda,Laurie I am so sorry to hear of you're dads passing. He always brought a smile to my face. The last time I saw him was at uncle Teds funeral and before that one of the reunions.He loved to fish as did my dad Del. There is no doubt they spent many days fishing on the river in Harding when they were young. One of my earliest memories is one hot summer day at grandma & grandpas house in harding. You're dad, uncle Ted & uncle John were there. I always enjoyed when we would come to visit. Rest in peace uncle Curt.