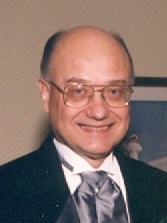 Born January 21, 1936 in Queens, NY, Henry lived in Maine and Minnesota before moving to Holland Township, NJ in 1982. He was a graduate of St. Augustine's Diocesan High School in Brooklyn, NY, then went on to receive a Master of Science in Forestry from Syracuse University. Henry worked as a chemical engineer for Crown Vantage Paper Co., formerly Riegel Paper Corp., in Milford, NJ, for twenty-one years. Prior to that, he worked for Great Northern Paper Co. and Boise Cascade Paper Corp. in Maine, and also for Potlatch Paper Corp. in Minnesota. Henry proudly served as a First Lieutenant, Armored Division, in the United States Army Reserve Forces from 1958 to 1968.

Henry had an interest in technology and had, at one time, built his own computer and television. He also enjoyed amateur radio. He was first licensed in 1979, and just became licensed again in September of 2019. He enjoyed sailing with his wife and daughter when they lived in Maine. Henry loved nature, the environment, and his community, and has served the Holland Township Environmental Commission since 2012. Most of all, he loved his family, especially supporting and spending time with his grandchildren. Henry was a member of St. Edward the Confessor R.C. Church in Milford, NJ.

Son of the late Charles and Bertha (Kavan) Gore, Henry is survived by his daughter Deborah Iacovone and her husband David of Bethlehem, PA, and his two grandchildren Jacob Henry and Rachael Elizabeth. He was predeceased by his beloved wife Eileen V. Gore in 2014 and his three brothers Charles Gore, Edward Gore, and Raymond Gore.

The family will receive relatives and friends for a visitation on Sunday, March 15, 2020 from 3-6 PM at the Johnson-Walton Funeral Home, 24 Church Road, Holland Township, NJ. Funeral services will begin on Monday, March 16, 2020 at 10 AM at the funeral home, followed by a Mass of Christian Burial at 11 AM at St. Edward the Confessor R.C. Church, 61 Mill Street, Milford, NJ. Interment, with military honors, will follow at the Milford Union Cemetery.

From: Linda and Paul Gore
Deb, David, Jacob and Rachael.... We are so very saddened by Uncle Harry’s passing. He was a brilliant man, dynamic and funny as all hell! We will miss him! Linda, Paul, Heather,David and Rachel

From: Charles Gore
Debbie and family, Sorry for your loss. Your father (My Uncle Harry) was a genuine gentleman. I will not forget the trips to Maine my father and I took to visit with uncle Harry. Uncle Harry was my Dads much younger brother. So, I can relate to Uncle Harry because he was Dads little brother and I was the son. During conversation, My Dad would sometimes unintentionally call me “Harry”. I was honored to be called “Harry” by my Dad. I hope I am like Uncle Harry in my life today.

From: Annamarie Gore Greene
Dear Debbie, David and Family, It is terrible to hear about the loss of Uncle Harry. I express my sincere sympathy to you and your family. Uncle Harry will be missed and will never be forgotten, may his soul rest in peace.